“Our mission is to address nuisance barking as a social issue and provide resources for dog owners and the neighbors of barking dogs to reduce or eliminate excessive barking.”

Got Barking® was founded in 2010 by Jesse Breedlove in response to the proven ineffectiveness of animal control to actually solve this problem for all parties involved.

After several complaints to animal control with no results he was forced to take measures into his own hands. It took over 4 years to get his neighbors to understand that their dog’s barking was a major problem.

The methods that his local animal control employs are outdated. They send a letter to the dog owner and then put the responsibility back on the complainant to follow up with another complaint if the nuisance barking is not reduced to an acceptable level.

After several formal complaints to animal control, it was Bark ender™ Plus anonymous barking dog letters coupled with several calls to the local police at night that finally ended this disruption.

Nuisance barking is an issue for animal control, not the police. The police officers that responded were far more understanding and proactive than animal control. They would actually knock on the door and ask the dog owners to bring their dogs inside.

Animal control refused to come out, even with the barking going on in the background while filing a complaint. Videos of the barking and maintaining a Barking Log did not help, not to mention all of the work and frustration that went into documenting the daily nuisance barking.

He knows there has to be a better way.

Got Barking?® along with Bark Ender™ will seek to place the responsibility of excessive barking squarely on the shoulders of dog owners to obey, and animal control to enforce existing laws and ordinances. 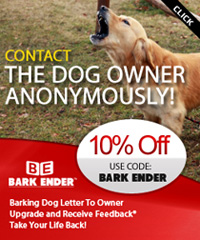